The G-Energy Team of Vladimir Vasilyev and Konstantin Zhiltsov, participating with the support of Gazpromneft-Lubricants in an Mini off-road version , claimed an absolute victory in the Africa Eco Race rally-marathon. 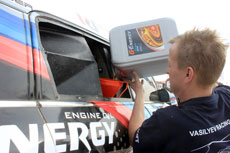 Africa Eco Race 2017 is a transcontinental marathon from Europe to Africa, whose route spans more than 6,000 km in total distance and 3,800 km in special sections, and runs through the territories of Morocco, Mauritania and Senegal, before finally finishing at Lake Retba (Lac Rose) on the outskirts of Dakar. The race started in Monaco on 30 December 2016, culminated in Senegal on 14 January 2016. Of the 87 teams on motorcycles, off-roaders and trucks entering the competition, just 63 – overcoming the fiercest off-road tests and most daunting trials in the sands of the Sahara Desert – made it to the finish. The G-Energy Team maintained its lead from the earliest stages – even along the toughest special sections, the racers managed to avoid repairs and the associated time losses. This allowed the Russians to widen their lead over their closest competitors with each stage, which ultimately let them win by a wide margin.

Vladimir Vasilyev, a pilot: “We didn’t have any bad patches in this race at all, but we sure had a lot of great moments: the road was good, and of course we were simply thrilled that we emerged as the winners. The most memorable part of all was without doubt the dunes. We’re happy that our equipment didn’t let us down, and pleased that once again, G-Energy oils demonstrated impeccable performance.”

Alexander Trukhan, General Director of Gazpromneft-Lubricants: “We congratulate the team on their impressive win – what an exciting and beautiful race! For us as a producer of high-quality lubricants it’s a victory not only in sport but also in the technology; after all, our G-Energy lubricants have ensured the smooth operation of a high-performance race-car motor.”

Gazpromneft-Lubricants (Gazpromneft-Lubricants Ltd.) is a subsidiary of Gazprom Neft specializing in the production and sale of oils, greases and technical fluids. Established in November 2007, Gazpromneft-Lubricants operates six production sites in Russia, Italy and Serbia. Total production volume amounts is 500,000 tons of high-quality oils, greases and technical fluids per year. The company’s product range features 500 different oils and greases in all market sectors (over 1,200 individual article names). The company’s products have earned the approvals of over 250 leading equipment manufacturers: BMW, Mercedes-Benz, Volkswagen, Volvo, Renault, General Motors, Cummins, MAN, ZF, KAMAZ, Avtovaz, Bosch Rexroth, and others. All in all, sales cover more than 60 countries worldwide.

G-Energy is Gazprom Neft’s premium brand of engine oils. G-Energy engine oils are designed for the latest European, American, and Japanese passenger vehicles. The unique adaptive technology ACF used in the oil provides enhanced performance characteristics depending on how the engine is used by activating the necessary additives as needed. In 2013, Gazpromneft-Lubricants was the first on the Russian market to issue a product range of G-Energy Racing 100% synthetic oils, developed for professional racecars and state-of-the-art sport cars. G-Energy Racing engine oils provide maximum protection against engine wear, and efficiently guard engine parts against the formation of deposits. They maintain their performance characteristics even under the peak-load conditions that are typical of racing.

Gazpromneft Marine Lubricants steps up presence in the Asia Pacific